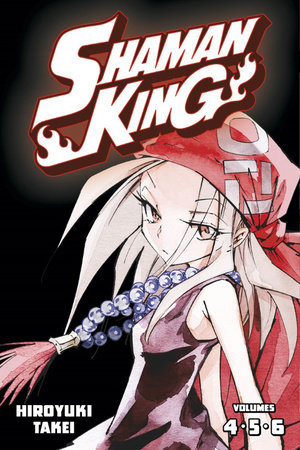 This volume corresponds to Vol. 4-6 of the original release, featuring updated translation and lettering, back in print more than 20 years after its initial release!

This volume corresponds to Vol. 4-6 of the original release, featuring updated translation and lettering, back in print more than 20 years after its initial release!

A shower of shooting stars signals the announcement of the long-awaited Shaman Fight: the tournament held once every 500 years to determine who will be crowned the next Shaman King. As the world’s shamans begin to gather in Tokyo, Yoh remains as carefree as ever…until he meets Silva—an officiant of the Shaman Fight, who challenges Yoh to prove himself worthy of earning the title of Shaman King! With his spirit ally Amidamaru, Yoh faces off against his first preliminary opponents: Horohoro, whose icy powers threaten to freeze them out, and Faust VIII, a morbid necromancer casting bone-chilling spells. With the stakes higher than ever, Anna, Yoh’s fiancée and coach, pushes his training beyond his limit. Does Yoh have what it takes to make it to the top, or will Anna’s training run him into the ground?

After starting out as an assistant on the samurai manga Rurouni Kenshin, Hiroyuki Takei in 1998 created Shaman King, which would go on to become a smash hit Shonen Jump adventure with an anime adaptation broadcast on Fox. Its success led to three spinoff and sequel manga. His cited influences include Osamu Tezuka, Hiroaki Samura's Blade of the Immortal, and Mike Mignola's Hellboy.
Hiroyuki Takei View titles by Hiroyuki Takei