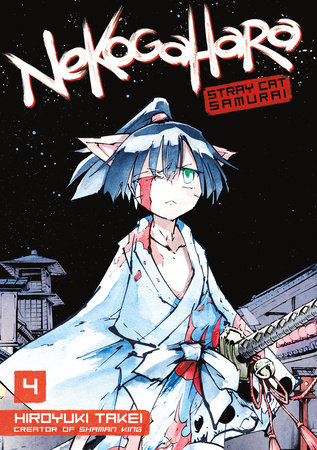 The bold new cat samurai action series from the creator of Shaman King!

In medieval Japan, a bell hanging on the collar is a sign that a cat has a master. Norachiyo's bell hangs from his katana sheath, but he is nonetheless a stray -- a ronin. This one-eyed cat samurai travels across a dishonest world, cutting through pretense and deception with his blade.

After starting out as an assistant on the samurai manga Rurouni Kenshin, Hiroyuki Takei in 1998 created Shaman King, which would go on to become a smash hit Shonen Jump adventure, published in the US by Viz Media, with an anime adaptation broadcast on Fox. Its success led to three spinoff and sequel manga. His cited influences include Osamu Tezuka, Hiroaki Samura's Blade of the Immortal, and Mike Mignola's Hellboy.
Hiroyuki Takei View titles by Hiroyuki Takei