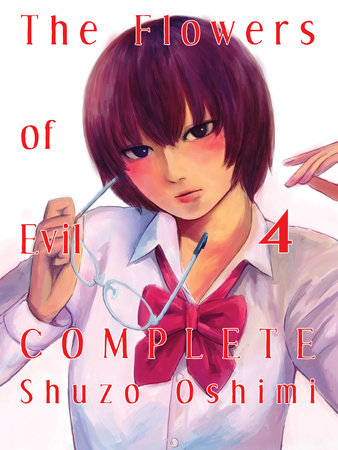 The Flowers of Evil - Complete 4

Part of Flowers of Evil

After his grandfather falls ill, Kasuga goes with his parents back to Gunma—his first trip back to his hometown ever since the incident with Nakamura—and Kasuga must confront the friends and family he hurt in the past. A former classmate gives him a tip regarding Nakamura’s current whereabouts, but will he have the courage to track her down and ask her the question that has haunted him since that day?

In this final installment, time passes and people grow, change and heal, and we get a glimpse into the first fateful encounter between Nakamura and Kasuga, from her point of view…

“While Oshimi’s works are often disturbing and unsettling, they are rarely without positive endings and character redemption. This perhaps speaks to Oshimi’s motives in writing these bizarre, yet grounded horror stories. While our lives are fragile and not entirely our own, we have to make the best of them. In this way, Oshimi’s works are fable-like. By exploring the darker aspects of our world, he emphasizes the importance of perspective and the individual. The Flowers of Evil [is], in this sense, a classic coming-of-age tale.” — ComicsVerse

Only in his mid-thirties, Shuzo Oshima is already considered a seasoned veteran of the Japanese comics community. Winner of the most important comics awards for newcomers, the Tetsuya Chiba Awad in 2001, Oshima has been penning quirky slice-of-life dramas now for over a decade for major manga publishers including Kodansha. After drawing nine series, Oshimi's star began to rise in 2008 with the release of his first hit, Drifting Net Cafe. This horror-themed homage to the legendary Kazu Umezzo work, Drifting Classroom, was adapted into a live-action series, and propelled Oshimi onto an international stage. He would soon reach new heights in 2009 with The Flowers of Evil. In 2010 and 2011, the property quietly landed on numerous must-read lists and helped revitalize the shonen genre.
Shuzo Oshimi View titles by Shuzo Oshimi