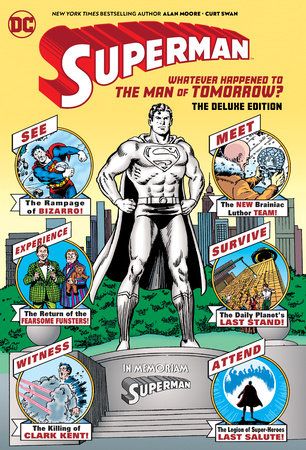 Superman: Whatever Happened to the Man of Tomorrow? The Deluxe Edition

Alan Moore's definitive tales of the Man of Steel featuring Batman, Wonder Woman, Robin and more is offered in a Deluxe Edition hardcover for the first time.

Legendary writer Alan Moore's seminal Superman tales are collected in this Deluxe Edition hardcover in which the Man of Steel faces his greatest foes and his final battle with the combined forces of Brainiac and Lex Luthor! Also featuring the classic story "For the Man who has Everything" from Superman Annual #11 in which Batman, Robin and Wonder Woman fight the evil warlord Mongul for the fate of The Man of Steel, as illustrated by Moore's Watchmen collaborator, artist Dave Gibbons. And in a tale from DC Comics Presents #85, Superman meets Swamp Thing, a character fans have identified with Moore for over 20 years!

Alan Moore is perhaps the most acclaimed writer in the graphic story medium, having garnered countless awards for works such as Watchmen, V for Vendetta, Swamp Thing and Miracleman. He is also the mastermind behind the America's Best Comics line, through which he has created (along with many talented illustrators) The League of Extraordinary Gentlemen, Promethea, Tom Strong, Tomorrow Stories and Top Ten. View titles by Alan Moore
Curt Swan View titles by Curt Swan