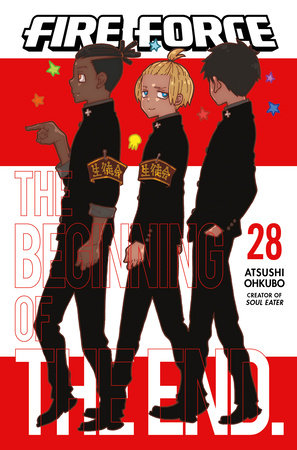 Now a hit anime! The new action fantasy set in a steampunk Tokyo from the creator of the smash hit Soul Eater!

THE ULTIMATE SHOWDOWN
Shinra vanishes into Adolla along with the other Pillars, while the remaining Fire Force members rush to Amaterasu to prevent the Great Cataclysm and the world’s destruction. Thus begins the ultimate showdown with the White Clad cult! Company 8 and Ogun take position at the gate to defend Amaterasu from an onslaught of powerful enemies—Charon, Dragon, and the Great Fiery Infernals! Meanwhile, Vulcan inﬁltrates Amaterasu to guard its activation switch, leading to a shocking encounter…! The whole planet’s survival rests on this battle!

Atsushi Ohkubo made his manga debut in 2001. In 2004, he created Soul Eater, which would run for seven years and become an international bestseller, later adapted into a hit anime broadcast on Cartoon Network. Fire Force is his first manga for Kodansha Comics.
Atsushi Ohkubo View titles by Atsushi Ohkubo