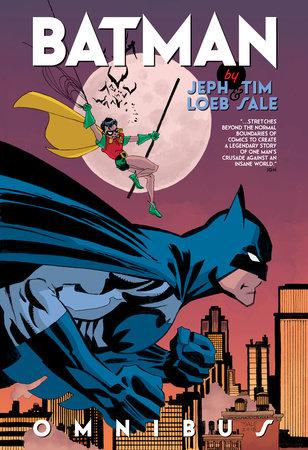 The Eisner Award-winning team of Jeph Loeb and Tim Sale created some of the most memorable and important Batman stories of all time. Now, for the first time ever, their complete works on the Dark Knight are collected together in one definitive omnibus edition.

"Stretches beyond the normal boundaries of comics to create a legendary story of one man's crusade against an insane world." --IGN

Jeph Loeb is an Emmy Award-nominated and Eisner Award-winning writer/producer living in Los Angeles. In television, his many credits include Smallville, Lost, and Heroes, and in film, Teen Wolf and Commando. In comics, he is best known for his work with the supremely talented artist and partner-in-crime Tim Sale on Batman: The Long Halloween, Superman for All Seasons, and Catwoman: When in Rome for DC as well as Daredevil Yellow, Spider-Man Blue, and Hulk Gray for Marvel. View titles by Jeph Loeb
Tim Sale is the Eisner Award-winning artist of Batman: The Long Halloween, Superman for All Seasons, Hulk: Gray, and more. His art was prominently featured on the hit NBC series Heroes. View titles by Tim Sale