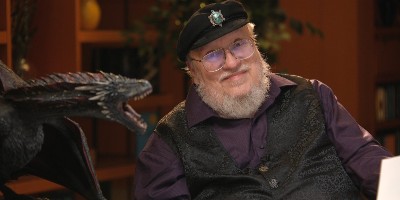 The livestream took place at the PRH Video Studio at 1745 Broadway, and featured an in-depth conversation between Mr. Martin and moderator, as well as fellow author, David Anthony Durham. It  included lively segments such as “Would You Rather: Westeros Edition”, George’s immediate reaction to the season finale of HBO’s House of the Dragon, and George answering burning fan questions.

The event delivered an elevated viewing experience featuring a three-camera set-up in full resolution HD, live overlay graphics, and a set decorated to evoke the world of Westeros, including a replica dragon provided by HBO.  The livestream sold over 1,300 books (through our event partners at The Strand bookstore) for viewers who wanted to attend live.

In just the first three days, videos publicly distributed on the PRH YouTube channel have garnered over 1.2 million views and added over 2,500 subscribers to the channel. Coverage of the event can be found on Deadline, Entertainment Weekly, Variety, Gizmodo, Collider and more.

Commenting on the zeitgeist event, David Moench, VP and Director of Publicity, Random House Worlds & Del Rey, explained, “The season finale was scheduled to air two days before the publication date of our book THE RISE OF THE DRAGON, an illustrated companion to FIRE & BLOOD. We knew interest around the books would be high immediately following the finale… a virtual event, where tickets were bundled with a book sale, was our best option for reaching as many readers as possible at a time when interest in the series was at its peak.”

George R. R. Martin is the #1 New York Times bestselling author of many novels, including those of the acclaimed series A Song of Ice and Fire—A Game of Thrones, A Clash of Kings, A Storm of Swords, A Feast for Crows, and A Dance with Dragons—as well as related works such as Fire & Blood, A Knight of the Seven Kingdoms, and The World of Ice & Fire, with Elio M. García, Jr., and Linda Antonsson. Other novels include Tuf Voyaging, Fevre Dream, The Armageddon Rag, Dying of the Light, Windhaven (with Lisa Tuttle), and Dreamsongs Volumes I and II. As a writer-producer, he has worked on The Twilight Zone, Beauty and the Beast, and various feature films and pilots that were never made. He lives with his lovely wife, Parris, in Santa Fe, New Mexico. Elio M. García, Jr., and Linda Antonsson founded and run the popular Westeros fansite, which is the definitive source for all things George R. R. Martin.