On November 23, 2021, Delacorte Press will publish the long-awaited new Outlander novel from #1 New York Times bestselling author Diana Gabaldon. Entitled GO TELL THE BEES THAT I AM GONE, this is the ninth novel in Gabaldon’s multi-million copy bestselling Outlander series and the basis for the award-winning STARZ television series, which just announced its seventh season. Entertainment Weekly exclusively revealed the book’s release date and cover this morning. Click here to read the article. 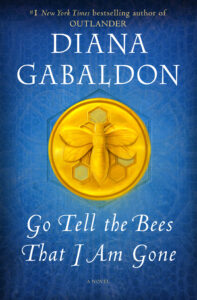 Torn apart by the Jacobite Rising in 1743, it took Jamie Fraser and Claire Randall twenty years to find each other again. Now, in GO TELL THE BEES THAT I AM GONE, with their family finally reunited, Jamie and Claire have more at stake than ever before as the looming American Revolution threatens to destroy everything they have fought to protect.

The Outlander series is published in 38 languages. Since the publication of the first book in the series, Outlander, was published in 1991, there have been over 50 million copies of Gabaldon’s novels sold worldwide across formats.