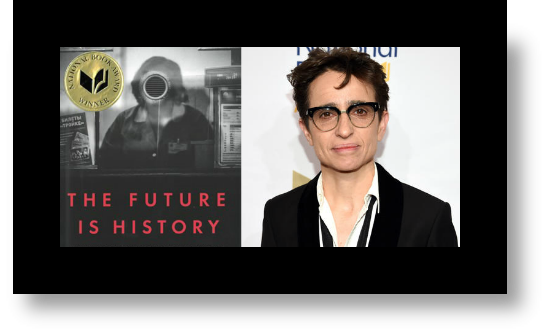 Masha Gessen, author of THE FUTURE IS HISTORY, was honored Wednesday night at a ceremony in Manhattan with the National Book Award for Nonfiction, continuing a cherished, time-honored connection for Penguin Random House authors with one of America’s most coveted literary prizes.

In THE FUTURE IS HISTORY, visionary journalist and bestselling biographer of Vladimir Putin Masha Gessen reveals how, in the space of a generation, Russia surrendered to a more virulent and invincible new strain of autocracy. Hailed for her “fearless indictment of the most powerful man in Russia” (The Wall Street Journal), Gessen is unparalleled in her understanding of the events and forces that have wracked her native country in recent times. She follows the lives of four people born at what promised to be the dawn of democracy. Gessen charts their paths against the machinations of the regime that would crush them all, and against the war it waged on understanding itself, which ensured the unobstructed reemergence of the old Soviet order in the form of today’s terrifying and seemingly unstoppable mafia state. “A remarkable portrait of an ever-shifting era…Gessen weaves her characters’ stories into a seamless, poignant whole. Her analysis of Putin’s malevolent administration is just as effective…a harrowing, compassionate and important book,” San Francisco Chronicle.

In accepting her Award, a beaming Masha Gessen spoke without prepared notes—because she “didn’t think this was going to happen.” She told the audience of 750 attendees that her final work ended up a much longer and different book on Russia than originally planned, thanking her publisher, Riverhead, “for sticking with me,” and especially her long time editor Becky Saletan.

See all books by Masha Gessen