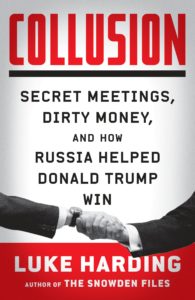 With the recent indictments of Paul Manafort, Richard Gates, and George Papadopoulos, Russia expert Luke Harding lays out the most in-depth look to date at the Trump campaign’s dealings with Russia. Beginning with exclusive access to Christopher Steele, the man behind the shattering dossier that first brought the allegations to light, Harding probes the histories of key Russian and American players with striking clarity and insight. In a thrilling, fast-paced narrative, Harding exposes the disquieting details of the “Trump-Russia” story—a saga so huge it involves international espionage, off-shore banks, sketchy real estate deals, mobsters, money laundering, disappeared dissidents, computer hacking, and the most shocking election in American history.

“Reads like a le Carré novel crossed with something by Kafka. . . . A fast-paced, almost novelistic narrative [that] gives readers . . . a succinct overview of the momentous events of the past year.” —Michiko Kakutani, The New York Times

“The first to assemble the sequence of events in a single volume. The book captures the drama of Snowden’s operation in often-cinematic detail. . . . Harding has delivered a clearly written and captivating account.” —The Washington Post

What You Need to Know: