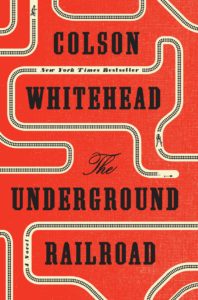 Our authors’ and our treasured long-standing good fortune with the annual National Book Awards continued last night in downtown Manhattan, as Colson Whitehead’s THE UNDERGROUND RAILROAD won the 2016 prize for Fiction.

This is the fourth consecutive year a Penguin Random House title has been honored in this category.

Mr. Whitehead accepted his award to thunderous applause from the 700 guests, among them, our CEO Markus Dohle, publishing colleagues from across our imprints, and members of the Penguin Random House shareholder board, including Bertelsmann CEO Thomas Rabe and Pearson CEO John Fallon, both attending their first-ever NBA ceremony.

In THE UNDERGROUND RAILROAD, a #1 New York Times Hardcover Fiction bestseller from Doubleday, Colson Whitehead tells the harrowing story of Cora, an indomitable teenage slave and her desperate bid for freedom from an antebellum cotton plantation in Georgia circa 1850. In August, THE UNDERGROUND RAILROAD became an Oprah’s Book Club selection, was excerpted in a stand-alone New York Times Magazine section, and received rave reviews. In her New York Times daily review, Michiko Kakutani said the novel “possesses the chilling matter-of-fact power of the slave narratives collected by the Federal Writers’ Project in the 1930s, with echoes of Toni Morrison’s Beloved, Victor Hugo’s Les Misérables, Ralph Ellison’s Invisible Man, and brush strokes borrowed from Jorge Luis Borges, Franz Kafka and Jonathan Swift… Whitehead has told a story essential to our understanding of the American past and the American present.”

From the podium, Mr. Whitehead exuberantly observed that the “last four months since the book came out have been incredible,” noting that Doubleday has been his “only publisher for eighteen years,” he’s been an author. He thanked his publicity teams over the years, and praised his editor Bill Thomas: “No matter what kooky [book] idea I come up with, he assures me we will do an incredible job publishing it. Thank you for your faith in me all these years,” said Mr. Whitehead. “It is incredible to have someone like Bill in your corner.”

Earlier in the evening Knopf/Vintage author Robert A. Caro was presented with the National Book Foundation’s 2016 Medal for Distinguished Contribution to American Letters.

In a book world of dizzying change, the National Book Award Ceremony dinner remains a celebration of authors, publishers, and the readers we serve. Our cross-company pride in Colson Whitehead’s achievement, and in Bill Thomas, and the publishing team at Doubleday, also embraces our multiple Penguin Random House NBA longlist semi-finalists and short list finalists this year.

It continues to be a humbling privilege for us to have the opportunity to bring their work to the widest possible audience. 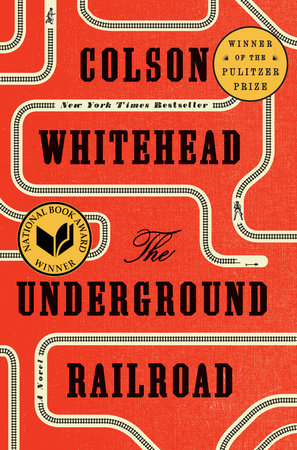 The Underground Railroad (Pulitzer Prize Winner) (National Book Award Winner) (Oprah's Book Club)
Colson Whitehead
978-0-385-54236-4
Winner of the Pulitzer Prize and the National Book Award, the #1 New York Times bestseller from Colson Whitehead, a magnificent tour de force chronicling a young slave's adventures as she makes a desperate bid for freedom in the antebellum South. Now an original Amazon Prime Video series directed by Barry Jenkins. Cora is a slave on a cotton plantation in Georgia. Life is hell for all the slaves, but especially bad for Cora; an outcast even among her fellow Africans, she is coming into womanhood—where even greater pain awaits. When Caesar, a recent arrival from Virginia, tells her about the Underground Railroad, they decide to take a terrifying risk and escape. Matters do not go as planned—Cora kills a young white boy who tries to capture her. Though they manage to find a station and head north, they are being hunted.In Whitehead’s ingenious conception, the Underground Railroad is no mere metaphor—engineers and conductors operate a secret network of tracks and tunnels beneath the Southern soil. Cora and Caesar’s first stop is South Carolina, in a city that initially seems like a haven. But the city’s placid surface masks an insidious scheme designed for its black denizens. And even worse: Ridgeway, the relentless slave catcher, is close on their heels. Forced to flee again, Cora embarks on a harrowing flight, state by state, seeking true freedom.Like the protagonist of Gulliver’s Travels, Cora encounters different worlds at each stage of her journey—hers is an odyssey through time as well as space. As Whitehead brilliantly re-creates the unique terrors for black people in the pre–Civil War era, his narrative seamlessly weaves the saga of America from the brutal importation of Africans to the unfulfilled promises of the present day. The Underground Railroad is at once a kinetic adventure tale of one woman’s ferocious will to escape the horrors of bondage and a shattering, powerful meditation on the history we all share.Look for Colson Whitehead’s best-selling new novel, Harlem Shuffle!
$27.95 US
Aug 02, 2016
Hardcover
320 Pages
Doubleday
US, Canada, Open Mkt
Tags: Black, Award Winners
Related articles