YOU CAN’T SPELL AMERICA WITHOUT ME: The Really Tremendous Inside Story of My Fantastic First Year as President Donald J. Trump (A So-Called Parody) by Alec Baldwin and Kurt Andersen.

Here is a look between the covers: “I have the best words, beautiful words, as everybody has been talking and talking about for a long time. Also? The best sentences and, what do you call them, paragraphs. My previous books were great and sold extremely, unbelievably well—even the ones by dishonest, disgusting so-called journalists. But those writers didn’t understand Trump, because quite frankly they were major losers. People say if you want it done right you have to do it yourself, even when ‘it’ is a ‘memoir.’ So every word of this book was written by me, using a special advanced word processing system during the many, many nights I’ve been forced to stay alone in the White House—only me, just me, trust me, nobody helped. And it’s all 100% true, so true—people are already saying it may be the truest book ever published. Enjoy.”

Alec Baldwin is a multiple Emmy, Golden Globe, and Screen Actors Guild Award–winning actor and a producer, comedian, and philanthropist. He has been nominated for an Oscar and a Tony Award and is the author of the New York Times bestseller A Promise to Ourselves.

Kurt Andersen is a nonfiction writer and a novelist and host of the public radio show Studio 360. He cofounded Spy magazine and is the author of FANTASYLAND: How America Went Haywire: A 500-Year History, a New York Times bestseller that Random House published in September. 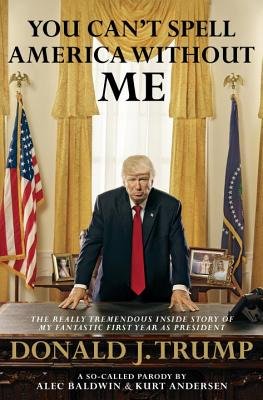